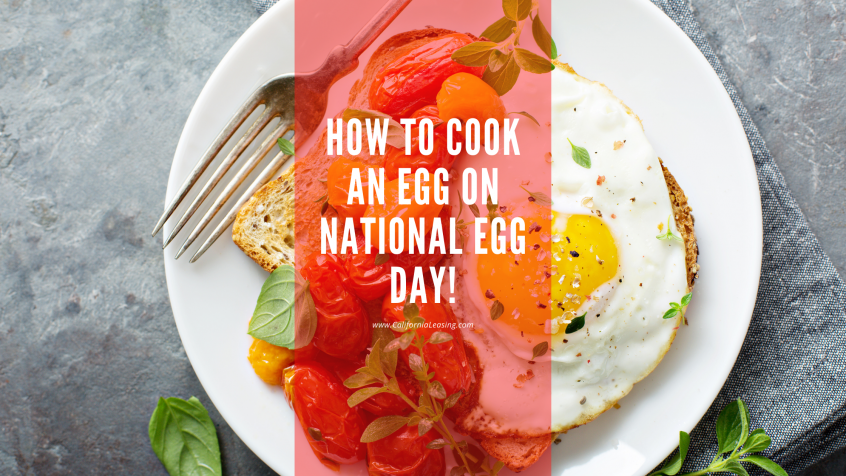 So the story goes that the 100 folds in a chef’s hat represent the 100 ways to cook an egg, but is this true? Well, let’s see…there’s scrambled, over easy, over medium, over hard, poached, shirred, soft boiled, hard-boiled, pickled, baked, sunny side up; in an omelet, quiche, or frittata; etc, etc, etc. And that’s just where the egg is the main ingredient! Don’t forget about how many other dishes include eggs as an ingredient…in cakes, souffles, breakfast burritos, egg noodles, mayonnaise, sauces. I could go on and on. So, there certainly are at least 100 different ways to cook an egg!

Being that today, is National Egg Day, we thought we’d highlight some of the most popular ways to cook an egg, whether you’re ordering at a restaurant or getting creative at home!

1. Hard Boiled
A hard-boiled egg is cooked in its shell in boiling water. The “hard” refers to the consistency of the egg white (or albumen) and the yolk. Making them is simple. Fill a pot with enough water to cover your eggs by about two inches. Bring it to a boil and carefully drop in the eggs and leave them for 10-12 minutes. For easier peeling, place the eggs immediately in an ice-water bath after boiling, then gently tap and roll them on a counter. (There’s also the gimmick of adding a teaspoon of baking soda to the boiling water to help loosen the shells, cracking the shells off both ends, and blowing the egg out of its shell. Look it up on YouTube.) Bonus: you can hard boil a bunch of eggs at a time and refrigerate them. Eat them with a sprinkle of kosher salt, or chop them onto salads.

Soft-boiled eggs follow the same process as hard-boiled eggs, but you cut the cooking time roughly in half. This gets the egg white cooked while leaving the yolk runny. Our preferred method is the “six-minute egg,” which sounds way fancy. (“This is a pile of breadcrumbs and a six-minute egg.” “Ooooooo!”) The six-minute is just like it sounds: bring your water to a boil, gently lower in the eggs, set a timer for six minutes, then remove the eggs and drop them in an ice bath.

Sometimes soft boiled eggs are eaten in the shell, stood upright in little egg cups. You can then daintily tap the top of the egg with a spoon and scoop out the insides. They’re great on toast, sprinkled with salt, pepper, and hot sauce. We also love dropping a couple on a thick black bean soup.

3. Hard Scrambled
The almighty scrambled eggs. When they’re done right, they’re my favorite preparation. I like that scrambled eggs can be made by accident: “Oops, I dropped these eggs. I guess I’ll just mix them up over some heat.” Scrambled technically means that the whites and yolks are broken and mixed together. Hard scrambled eggs are cooked all through. This is the default preparation for scrambled eggs at most restaurants, and while they’re good, they border dangerously on dry.

4. Soft Scrambled
That’s why I prefer soft scrambled eggs, sometimes referred to as “wet.” The texture is 10x better, and they play more nicely with other ingredients. The difference between soft and hard scrambled eggs is cooking time. If you want soft scrambled eggs, you need to keep in mind those eggs. cook. quickly. You can’t walk away from them. Whip your eggs (I add a little milk) in a separate bowl. Heat your pan no higher than medium, grease it, pour the eggs in, then stay close with a spatula. Turn and fold them repeatedly while they cook. Use the spatula to prevent them from spreading out, especially up the sides of the pan; when they spread too thin, they’ll over-cook quickly. I usually fold them until they no longer look runny, but still, look wet (i.e. light is reflecting in them). Have your plate ready so you can remove them from heat immediately. They’re perfect on buttered toast with salt and pepper; try adding slices of cheese or sauteed kale.

4a. “Perfect” Scrambled Eggs
If you want super creamy soft scrambled eggs, you can use the method we learned from Gordon Ramsay (watch it here). Drop eggs into a pan over medium-high heat, along with one, a thin pat of butter for each egg. Then start stirring with a spatula. Break the yolks, let them mix with the butter and whites. And keep stirring. If the pan gets too hot, lift it off the heat briefly. And keep stirring. Do this for about 4-5 minutes, until the eggs start coming together. Right before you take them off the heat, add a dash of milk, sour cream, or creme fraiche. Stir that in, then ladle the eggs onto toast and sprinkle with herbs (chive, dill, green onion) or salt and pepper. The result is some of the creamiest, softest eggs you’ve ever tasted.

4b. Omelets & Frittatas
Scrambled eggs can be manipulated in many ways. Ordering plain scrambled eggs means they’ll be mixed and moved in the pan, whereas an omelet or frittata indicates that the scrambled eggs are cooked until they’ve stabilized into a usable form and topped with other ingredients: cheeses, meats, vegetables, anything. A frittata is typically open-faced, whereas an omelet is folded over in half onto the additions. But the egg base remains the same (except in egg white omelets, where yolks are separated out).

4c. Scrambles & Hashes
These preparations are pretty simple, as far as eggs go. A scramble usually means other ingredients are scrambled in the pan with the eggs. This could include meats, cheese, sauteed veggies, or diced potatoes (or, yes, hot dogs). Good if you’re a fan of scrambled eggs and, well, everything else breakfast has to offer.

5. Sunny Side Up
Sunnyside up means your egg yolk looks like a bright morning sun. To make: crack an egg directly into your greased frying device. Then fry it until the edges brown, WITHOUT flipping. Flipping your sunny side up egg turns it into an over easy egg. The yolk is runny, and depending on how long you fry it, the albumen is completely or partially set. We refer to these as runny or “dipping” eggs. The runny yolk is great for dipping toast into.

6. Over Easy
Eggs over easy and sunny side up are often using interchangeably, but they are different. You go from sunny side up to over easy by simply flipping your egg when the edges are brown. The “easy” doesn’t refer to the simplicity of turning over an egg, but the state of your yolk. “Over easy” means the egg is flipped and cooked just long enough to make a film on the top of the yolk. When served, the yolk – and some of the whites – are still runny.

7. Over Medium
Over medium is the next step after easy: they’re fried, flipped, and fried a little longer, enough to cook the whites through and brown the edges slightly. You’ll develop a thicker film on your yolk, but the inside is still runny. Good for those like the dipping quality without a watery egg white.

8. Over Hard
And over hard is the final step. Over hard is fried, flipped, and fried again – usually with the yolk broken – until both the white and the yolk are completely cooked. Just tap the edge of your spatula into the yolk or poke it with a fork before turning it over. Be careful not to dribble the yolk when flipping.

9. Poached
Poaching ties with soft scrambled is my favorite preparation. It’s like boiling but without the shell, or like over a medium that skips contact with the pan. This means you’re avoiding any hard edges. The white is cooked through and the yolk is warm and runny. Just imagine it mixing with a bright hollandaise on an eggs benedict.

Methods for poaching vary. Restaurants looking to poach in bulk will often immerse ramekins with raw eggs into boiling water, sometimes a whole tray full at a time. If you’re just poaching at home, it’s actually much easier than you may think. I haven’t perfected my personal method, but the two that have worked for me are:

1.) The Whirlpool. Heat your water just shy of a rolling point. Add a dash of vinegar (some recipes call for a 1/2 cup, but that’s always too much for me. I don’t like my eggs tasting like acetic acid). Crack the egg into a tiny bowl. Swirl the water in your pan to create a whirlpool, then carefully drop the egg into the center. The swirling pulls whites altogether in the center. Leave it in the water for about five minutes, then lift it out with a slotted spoon.

2.) The Strainer. Heat water. Add vinegar. Crack the egg into a mesh strainer to let the most watery portion of the whites (it’s not much) drip out – this prevents danglers. Carefully decant the egg from the strainer into the water. Cook for about five minutes. Retrieve with slotted spoon.

11. Basted
I’ve come across some eggs on restaurant menus that are labeled as basted but are clearly poached. Generally basted means liquid or steam is used to thoroughly cook the egg white without flipping. For instance, while frying an egg in butter, you repeatedly scoop and pour the extra butter on top of the egg. This cooks the yolk and top whites without forcing you to flip it. Alternatively, you can also squirt some water into the pan and then cover the egg with a lid, to steam the whites. If you do this quickly, you can cook the whole egg before the edges start to brown, which seems to be the appeal of basted eggs (much like poached eggs).

Love these ideas? Check out the blog Breakfast with Nick for more ideas on cooking and food preparation!

We use cookies to ensure that we give you the best experience on our website. If you continue to use this site we will assume that you are happy with it.Accept